Report and pictures by Ann Bailey.

For Trevor and I this was our third visit to Roots Camp and for Dave, Linda and Mark, their second so we knew exactly what to expect; comfortable accommodation, good food, friendly staff and outstanding diving organisation and facilities.

We’d booked their ‘millionaire’s package’, 10 guided shore dives at sites along the coast, unlimited house reef diving and soft all-inclusive. Thanks to very calm, hot weather during the first four days and a comfortable 23-25C in the water, we made good use of the package completing a total of 16 dives through the week many of which were over an hour long. Apart from the house reef, which we dived 6 times (including a night dive), we visited 5 other sites. Probably the best is Serib Kebir which has caves and caverns to swim through on its south side and a pristine, beautiful reef smothered in colourful soft and hard corals on its north side. 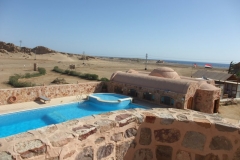 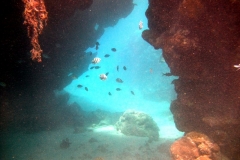 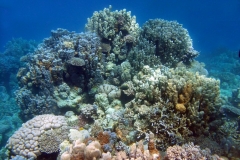 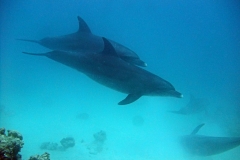 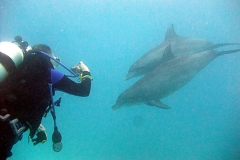 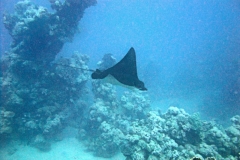 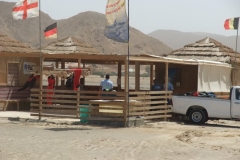 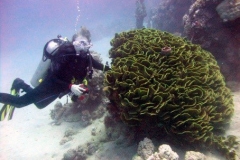 Although the variety of reef fish was as large and spectacular as ever, we were all of the opinion that the overall abundance of fish was reduced. We saw a lot of local men catching fish and octopus on the reef tops which could explain this reduction in fish numbers. It seemed a shame, and short sighted, that they may be making the reef less appealing to divers but who can blame them when their economy is suffering from reduced tourism and they still have families to feed.

We were offered an optional trip on a hard boat out of Hurghada harbour to do two dives in areas where dolphins are known to frequent. I think my eyes must have lit up so much that all the others had to agree to go on the trip despite the 5.00am departure and a 3 hour journey, bus and boat, to reach the dolphin reefs. To add to our discomfort, the wind got up that night and by the time we were steaming out of Hurghada the sea was fairly choppy. After the first dive in ‘dolphin house’ without a sniff of a dolphin we were all a bit downhearted but our guide, Ahmed assured us he guaranteed dolphins next time…and he didn’t disappoint. We were told to kit up ready and when the skipper sounded the horn we all leapt into the water, descended immediately and found ourselves in the company of a pod of perhaps 8-10 dolphins. These wonderful creatures kept us entertained for about 25 minutes circling around and through our group and showing off their acrobatic skills. It was a most magical experience. And then, all of a sudden, they were gone. They were probably bored of us but I could have watched them forever!

So, to our last day. The sea was still choppy so it was decided we should return to Serib Kebir where the entry is fairly sheltered. Two lovely dives again and, as we were returning along the northern reef a pair of large eagle rays cruised by; another spectacular sight which rounded off our week perfectly.